What is Essential Simplicity?

The dictionary defines essential as absolutely necessary or indispensable. Simplicity has more definitions but the one I like the most is freedom from complexity.

I am not one to come out and condemn someone for having a lot of things and/or a lot of stuff going on in their lives…that is their decision. I just know that the more things you own and the more stuff you’ve got going on…the more complicated life can get. For myself personally, I choose not to embrace complexity…I choose to embrace simplicity. To me, simplicity IS essential…hence the name for this blog.

My goal in having this blog is to help keep myself accountable for the goals I’ve set to simplify my life and to help encourage others who have decided to follow this lifestyle themselves. Not everything I do will be the right step for another, so feel free to pick and choose from the ideas presented here…and maybe you will find other ideas that help you that you may want to pass along here as well.

The things I will concentrate on here will be to simplify in these main areas: cleaning, organizing, shopping, cooking, etc. Other things touched on will be simplifying life online, simplifying activities offline, using resources to find cheap or free fun, getting or staying in shape, staying healthy, etc.
In the interest of full disclosure, I originally started this blog in February 2008 and posted somewhat sporadically off and on for the next three years, but had not posted at all after January of 2011. Recently I have started embracing an even more minimalist approach to life and decided to revamp my blog to reflect that and to attempt to post a bit more often on my blog as I work toward an ever more simple, ever more minimalist lifestyle. The posts that were not relevant to my more minimalist lifestyle were either deleted or moved to my personal blog and the ones that still relate to simplicity and minimalism will be reworked and posted again in the near future.
Since this is a blog, I do welcome comments. Since this is MY blog, comments can be deleted at my discretion. Just keep it clean and polite, please!!
Posted by Rainey Daye at 12/12/2011 No comments:

Since we'd been having some problems with our dryer drying our clothes (we have a suspicion that the vent from laundry room to outside is clogged somehow)...and since we also wanted to save on our electric bill...we bought a drying rack!!
Now, we live in an apartment complex that has rules against hanging clothes out to dry off the balcony. I can in a way understand, as it upsets the American white-bread aesthetic...but after having lived in Europe, where almost everyone has colorful clothes hanging off balconies, it seems such a silly thing to fuss about. In any case, though, we had to come up with something that would function well indoors.
We already had a small wall mounted rack near our washer for small things that collapses against the wall when not in use. We got it at IKEA last year and I like it rather well. We couldn't, however, mount any more things to the wall...so we went looking for a regular euro-style folding rack that sits on the floor...
We ended up not getting the one we'd seen in the IKEA catalog, because we found another one that really impressed us. It is TALL...as tall as I am, but folds up small enough to slide between the fridge and the wall when not in use...and EASILY holds a load of clothes (it could hold two, but I'd rather have the clothes dry faster). We set it up in the corner of our bedroom, which seems to work, except for when our kitten claims it as her jungle-gym!!
We've used it now for a couple weeks and it's worked out well. The clothes are drying stiffer, so I'm contemplating adding vinegar to the wash, as I've heard it helps with that. We'll have to iron some of our clothes more, but the iron uses a whole lot less energy than a dryer...that's for sure!! The jury is still out on a few clothing items though...I kinda like the way my jeans fit better when they've dried in the dryer and my tank tops look a little stretched out after air-drying.
All in all though, it's worked pretty well. Do any of you air-dry clothes...and if so, do you do it despite rules to the contrary (ie. apartment rules, HOA rules, etc.)? 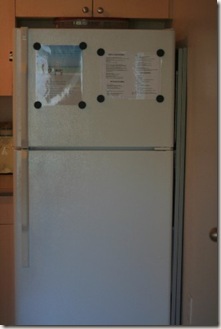